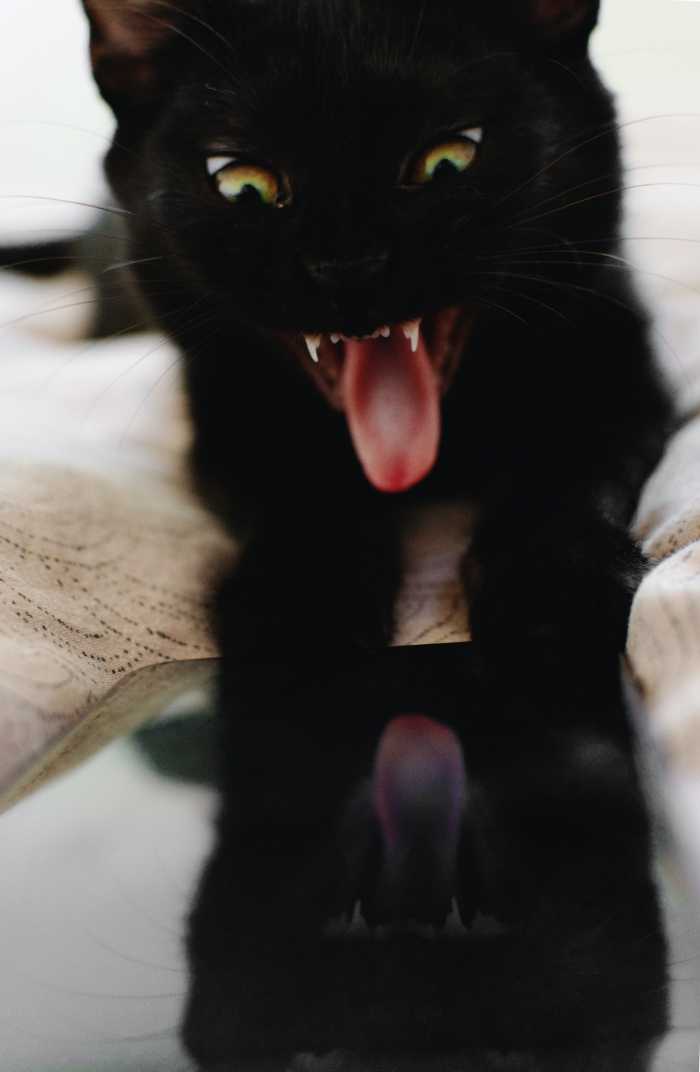 Photo by Tudor Baciu on Unsplash

Aggressive pet cats can be a serious cause of concern for cat parents. Vets define aggression as threatening behaviour towards other cats or humans. It’s a very common problem.

Cats may be small in size, but they possess razor-sharp claws and a set of powerful teeth. They’re capable of inflicting painful bites and severe lacerations. This can lead to injuries to the attacked entity and your pet cat, not to mention the possibility of a hefty vet bill.

Treatment for aggressive behaviour depends upon accurate diagnosis of the cause. With that in mind, here are some of the most common causes that can trigger an aggressive attitude in your feline friend.

This is probably the most frequent and most visible form of aggression.

Unneutered males fight for female cats and over territory. Just the sight of another male in the vicinity will raise your pet tom’s hackles. This will be followed by loud hissing and howling. After this, if one of them does not back down, fur may fly.

Aggression between cats in the family is also an issue. It can be between two males or two females or between a male and a female. The cats may not actually fight, but the aggressor cat will try to establish dominance through posturing.

A larger cat may try to dominate a smaller cat or one that is not that physically active. Cats that have had unpleasant experiences with other cats early on in life may be maladjusted later and find it difficult to share space with others of their species.

Inside the house, if you’re faced with such a situation, then you must segregate the fighting cats as soon as possible. Don’t let the cat-fight continue. Ensure that the weaker cat has some hiding spots and perches where it can retire in peace. Separate the food and water bowls.

Sometimes rewarding good behaviour can work. Offer the cats treats if you see that they’re socializing; they may learn to associate treats with good behaviour.

Intact males are more prone to aggression, and neutering lessens their aggressive tendencies. You may consider neutering your male if they show signs of aggression.

A cornered cat is liable to react aggressively. A threat perception with no escape route can bring out an aggressive response.

A fearful cat will display body postures that include defensive signals such as crouching, leaning away, and flattening the ears, as well as signs of aggression, such as hissing and scratching.

Give the cat an escape route and leave them alone. This will help soothe their frazzled nerves.

Make sure your cat has their own space away from other pets and people where they can retreat and never feel cornered or trapped.

Cats of both genders are territorial. They may choose to keep other cats, dogs, and even humans out of the area they consider their territory.

Cats patrol their territory and demarcate it by urine spraying.

Territorial fights are more likely to break out if:

Sometimes cats, particularly those younger than two years old, unintentionally hurt their humans by being aggressive in play. There’s also a chance of damage to household items.

Aggressive behaviour while playing includes stalking, chasing, ambushing, swatting, and so on. Cat experts believe that this behaviour enables developing cats to exercise better control on the sheathing and unsheathing of their claws and also to control the intensity of their bites.

This is, therefore, an essential aspect of their development. It’s normal for kittens orphaned or weaned at a very young age to be overly aggressive at play.

This form of aggression can manifest when a cat parent least expects it. It can catch you unawares. Essentially, this happens when the cat is unable to vent their anger at the animal or person that has agitated them. The cat then vents their ire on a person or object they can reach.

Such aggression can often be construed as unprovoked by cat parents who may not at all be aware of the original trigger or episode that irritated the animal. However, the cat will not go out of their way to find someone to vent their anger at.

If you happen to approach the cat while they’re still agitated, they may attack. The cat’s reaction and aggression is not premeditated. It is instinctive.

If you can see that the animal appears excited and is in an aggressive posture, it’s best to leave them alone. People who venture too close to break up cat fights risk getting hurt in the process.

Even cats who normally tolerate petting might find too much cuddling and hugging a little suffocating.

Actions such as scratching and stroking, if carried out repeatedly, can cause irritation and even pain to the animal. Females are more amenable to petting than males. Males are usually less responsive to physical handling.

Keep your eyes open for signs of discomfort from the animal. These include an effort to wriggle out of your grasp and flipping their tail. Let the animal go if they appear restless.

If the animal has taken to socializing with humans from an early age, they will be more tolerant to touch and handling. Gentle handling of kittens makes them lose their inhibitions toward being caressed and groomed by human hands.

Aggression From Pain Or Illness

This type of aggression is easy to empathize with. Even humans lash out in pain.

Cats who are in pain may strike if the part of the anatomy that is hurt is touched — for example, chipped claws or a wound earned in a fight. Toothache and arthritis can also lead to frustration and an aggressive reaction.

Cats can also become aggressive due to reasons such as abnormal thyroid functioning, improper working of the adrenal gland, age-related inadequacies in sight and movement, etc.

Take your cat to the vet if they display signs of aggression. Your vet is the best person to find the most probable reason for the animal’s aggressive behaviour and chart a plan to improve the behaviour. This may include changes in diet and medication as well.

Watch For The Signs Of Aggression

With time, you will learn from observation and experience when cats are best left alone. Given below are offensive and defensive postures from cat body language.

Knowing these signs can help you find out when an instance of aggression may happen and, hopefully, prevent injuries and destruction.

Check out our article on how to stop cat aggression here!

Has your cat ever acted aggressively? What caused your kitty to act that way? Let Cattime know in the comment section of the original article: The Most Common Causes Of Aggression In Cats - CatTime