​Our Pet of the Month for July is Indie the Nanday Parakeet.

Homesitter of the Month for July 2021 is Peter Sinclair

Pets Radar - Do hamsters hibernate? 5 things to know before you buy a hamster

Cat Time - Albino Cats Are Not Just White Cats! Here’s How To Tell Them Apart

Country Living - The best walking holidays in the UK for 2021

Homesitter of the Month for May 2021 is David Johns

Homesitter of the Month for April 2021 is Elaine Buckley

Homesitter of the Month for March 2021 is Janet Hebden 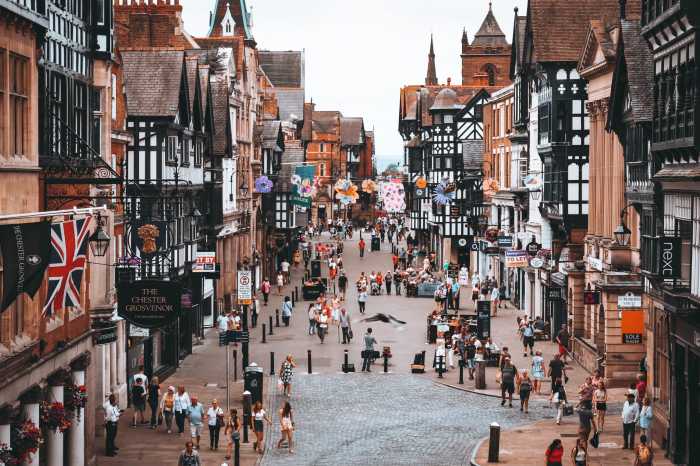 You know how the saying goes: so many places to visit in the UK, so little time - especially when you only have a weekend free or are saving your annual leave for the prospect of a further-flung holiday later in the year.

When Britain opens up again, we'll be more than ready to take the best city breaks in the UK, from Bath to Edinburgh.

So, for a quick trip after lockdown, we've rounded up the best UK city breaks for your list, whether you're after some culture, want to put food at the forefront or are just after quaint streets to meander around and picture-perfect architecture.

From the enchanting canals of Cambridge to the hilly capital of Scotland, with its medieval Old Town and elegant Georgian New Town boasting gardens and neoclassical buildings.

Whether you're travelling solo, as a couple, treating the family to a trip or catching up with old friends in a new place, you'll want to check out our wonderful selection.

The countryside can wait for now, these are the city breaks in the UK that are top of our list. 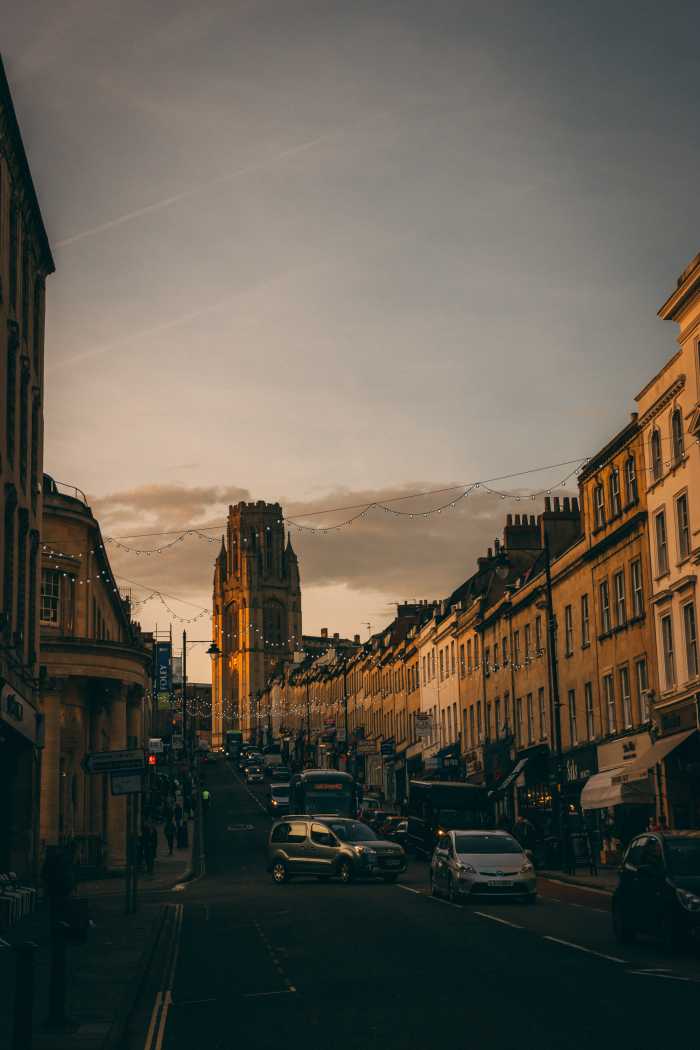 Photo by Mario Klassen on Unsplash

The Clifton Suspension Bridge is undoubtedly the city’s best-known landmark and one of the most beautiful sights around, but that's not all that Bristol has to offer. Though we must add here that, if you are interested in the bridge, you can join free weekly walking tours to learn more about the history, construction and maintenance of this iconic structure.

Elsewhere in Bristol on one of the best city breaks in the UK, there's one of the top vintage scenes in the UK - with boutiques dotted all over the city (we recommend making a bee line for That Thing, a vintage store that has become somewhat of an institution here).

Bristol Harbour is another must-see spot that you can’t miss. It played a very important role in the city’s development and history, and today boasts a plethora of museums, galleries, restaurants and bars.

Where to stay: On the quayside of the Floating Harbour, The Bristol Hotel is 10 minutes' walk from Brunel's SS Great Britain and boasts stylish rooms, a riverside restaurant and an elegant River-side Lounge offers light snacks, afternoon teas and a fine wine list. 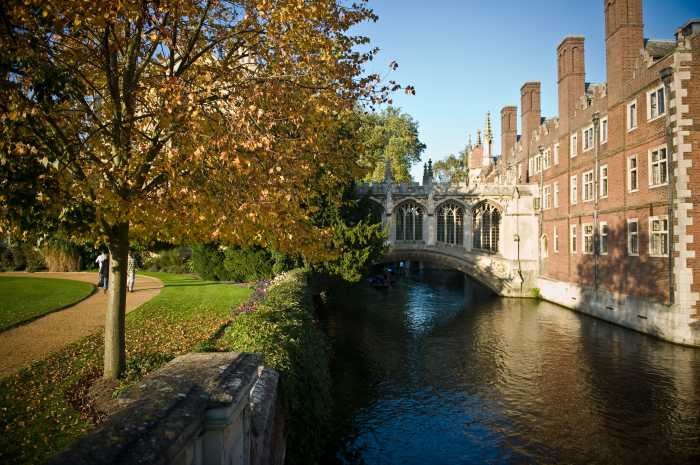 Photo by Jean-Luc Benazet on Unsplash

Well known for its waterways and Gothic university (the gorgeous buildings of which can be spotted all over the city), there really is something for everyone when it comes to entertainment in Cambridge.

You can go punting on the River Cam, enjoy a picnic in the park, join a walking tour of the city or rent a bike and traverse the intricate network of cycle paths in and around the city - it's a brilliant way to explore, as long as you've got good balance.

As well as the free-to-enter University of Cambridge’s Fitzwilliam Museum, which houses world-class collections of art and antiquities spanning centuries and civilisations, and Kettle’s Yard, one of the country’s finest galleries and a major centre for 20th century and contemporary art, visitors will find a wide range of artworks, sculpture trail walks and galleries to appreciate.

Where to stay: Following a comprehensive redesign by renowned architect John Simpson and interior designer Martin Brudnizki, University Arms has re-established itself as one of Cambridge's most enchanting destinations. The boutique hotel offers easy access to the university, as well as Newmarket Racecourse, IWM Duxford and the attractions of Cambridge city centre. 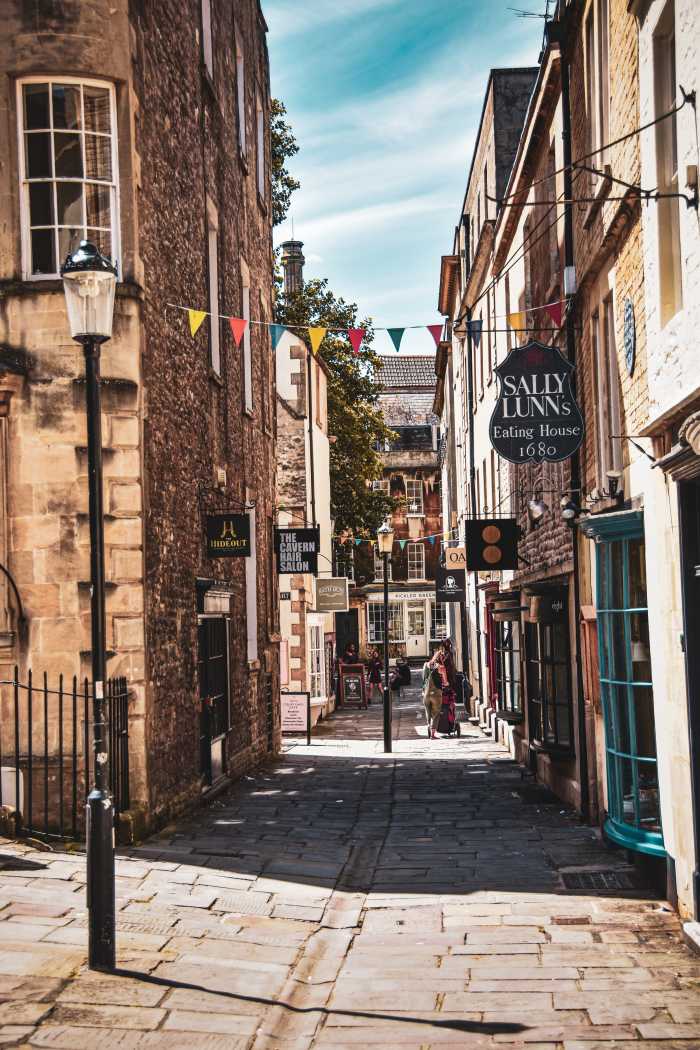 Photo by Liv Cashman on Unsplash

During the ancient Roman times, Bath became famous for its natural hot springs that bubbled up from the ground, and this charming city still retains its allure today.

You can pay a visit to those hot springs that first started it all, as, when the Romans established a settlement here called Aquae Sulis, they constructed a large bath complex and its labyrinth of rooms can still be explored today.

In addition to the Roman Baths (we advise booking in advance to avoid the queues), you can also admire the grand Georgian architecture at the Circus and the Royal Crescent; these imposing buildings are a reminder of Bath's history as a sophisticated spa town in the 18th century and - for a time - home to Jane Austen.

And, of course, no trip to Bath would be complete without taking advantage of a luxurious spa treatment - so, head to the Thermae Bath Spa to find out what all the fuss is about.

Where to stay: Originating from the 1780s, Henrietta House Hotel is a Georgian period townhouse set in the heart of Bath. Rooms are modern and individually styled, each dotted with hand-picked antiques, furnishings and original artwork. The prime location means you can easily explore Bath Abbey, the Roman Baths, Thermae Bath Spa, The Jane Austen Centre and The Holburne Museum of Art. 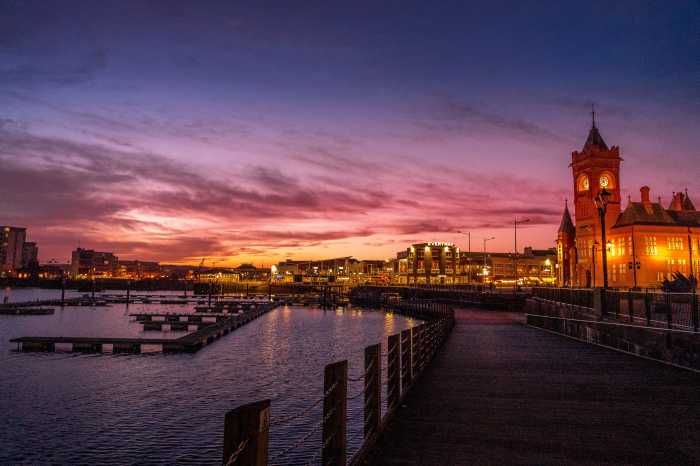 Photo by Nick Fewings on Unsplash

It's impossible to miss the rich history and culture that make Cardiff a fitting capital for Wales. With a striking medieval castle at its centre, market stalls selling authentic wares - think wooden love spoons and Welsh cakes - span out across the streets around it.

We recommend a walk around Bute Park right behind it or you could hop aboard and take a guided boat tour from the park and travel the short distance down to Cardiff Bay for an array of waterside eateries, and to see the iconic Millennium Centre building.

Where to stay: The Park Plaza is a city-centre hotel within walking distance of Cardiff’s main attractions, decked with original art, home to an extensive spa offering and a restaurant serving uplifted British cuisine – and where the sound distant of church bells offers a charming wake up call. 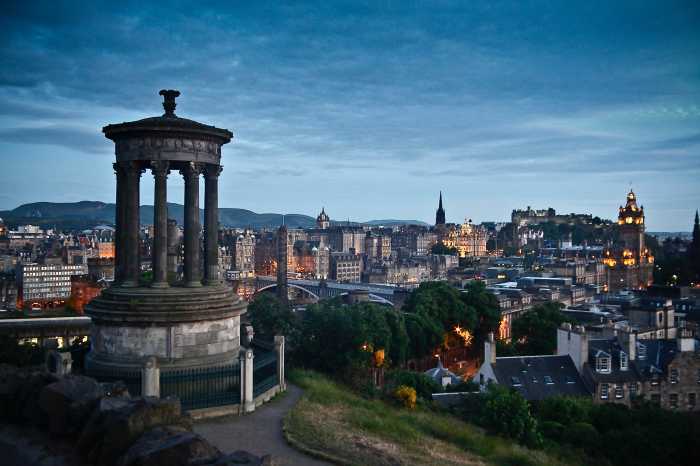 Photo by Peter Cordes on Unsplash

Edinburgh is Scotland's buzzing capital, with an enchanting medieval Old Town and elegant Georgian New Town with gardens and neoclassical buildings. Casting a shadow over it all is Edinburgh Castle, home to Scotland's crown jewels and the Stone of Destiny, once used in the coronation of Scottish rulers.

Where to stay: Overlooking Carlton Hill, Princes Street Gardens and Waverley Station, the four-star Scotsman Hotel was originally built in 1905. This majestic, listed building was once The Scotsman newspaper.

Each unique room and suite at the Scotsman Hotel boasts individual features, including curved corner window bays with scenic views of the city and a marble-tiled en suite bathroom. 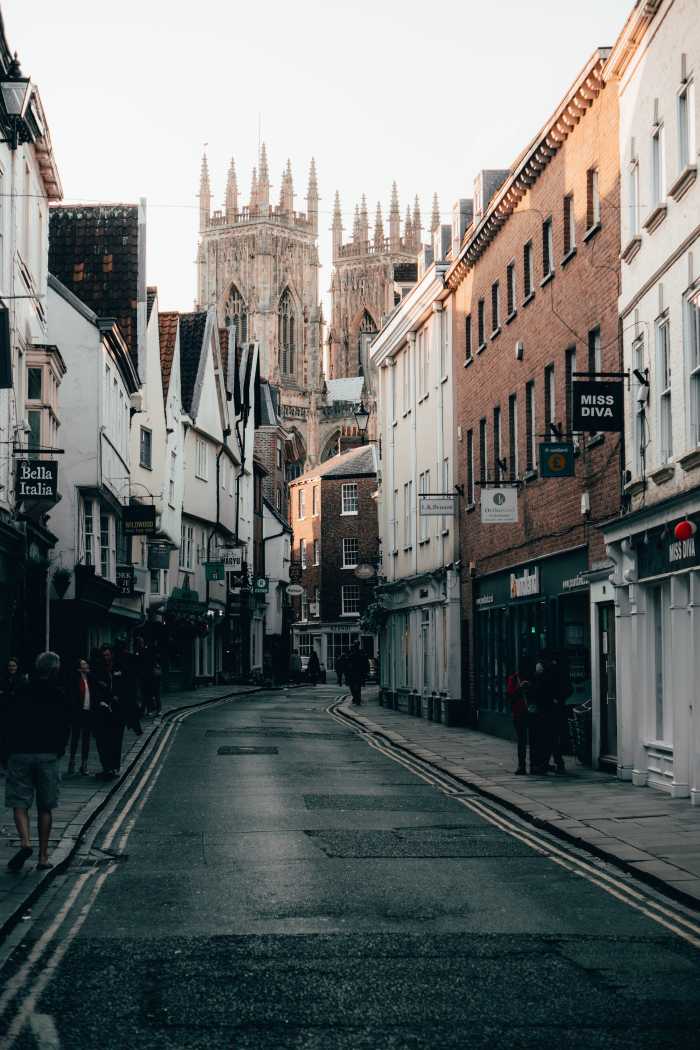 Photo by Illiya Vjestica on Unsplash

Perched between London and Edinburgh, with the Yorkshire Dales and Moors spanning out from its sides, York has definitely earned itself a place as one of our top city breaks in the UK.

As well as its 13th-century Gothic cathedral and walkway through the old city walls along the river, York is home to terrific museums.

From Monk Bar, which houses an exhibition tracing the life of 15th-century Plantagenet King Richard III, to Jorvik Viking Centre - containing lifelike mannequins depicting Viking life in the city - there's no shortage of things to learn, see and do. 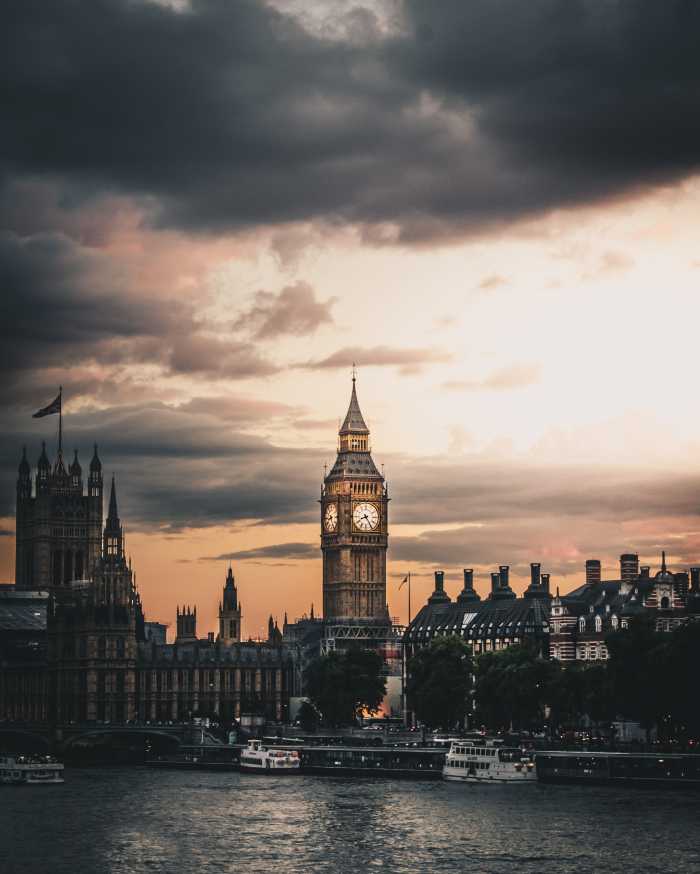 Photo by Luke Stackpoole on Unsplash

We couldn't round-up our favourite city breaks in the UK without adding London. The iconic capital is well-known for its architecture, plethora of multi-cultural restaurants and iconic landmarks and galleries.

However, there is also a quieter side to London - from the boutiques and sprawling greenery of Hampstead, to the winding backstreets of Angel, where hidden treasures reward those willing to head off-piste.

Where to stay: Overlooking the historic Tower of London, the luxury four-star Leonardo Royal London City - Tower Hill boasts a spa with a large swimming pool and gym.

Featuring a brasserie and a cocktail lounge, the hotel is just two minutes' walk from Tower Hill Tube Station and offers range of onsite bars and restaurants. Lutetia Brasserie provides a traditional French menu with an outdoor dining area and a wide variety of drinks can be enjoyed in the Isis Cocktail Bar and Lounge. 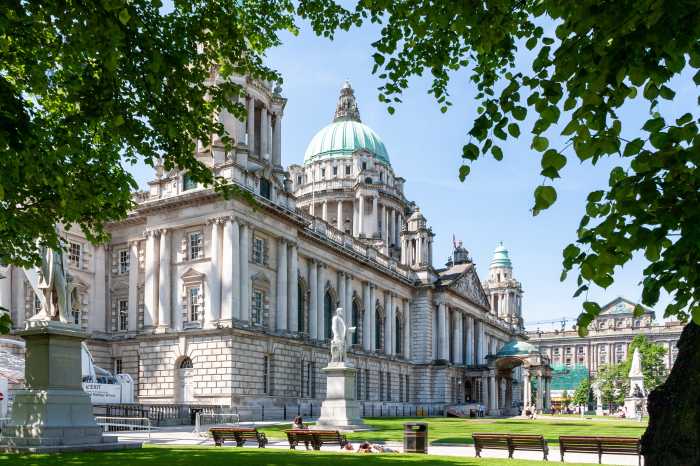 Photo by Dimitry Anikin on Unsplash

Northern Ireland’s capital, as many people know, is the birthplace of the Titanic (which famously sunk in 1912 after hitting an iceberg), but it's a city with much more than this sad legacy. Although, if you are interested in learning more about the infamous cruise ship, delve into the story at the Titanic Belfast, an aluminium-clad museum reminiscent of a ship’s hull, as well as shipbuilder Harland & Wolff’s Drawing Offices and the Titanic Slipways, which now host open-air concerts.

There are many other enthralling things to do and see here though, from a stroll around the beautiful (and free) Botanic Garden and a visit to the Ulster Museum, to taking in the hilltop views of Belfast Castle, built in 1870.

Where to stay: In a converted shipbuilding office dating from the 1880s, the polished Titanic Hotel Belfast is surrounded by the maritime landmarks of the Titanic Quarter. It’s two km from Titanic Quarter train station and four from the cultural exhibits at the Ulster Museum. 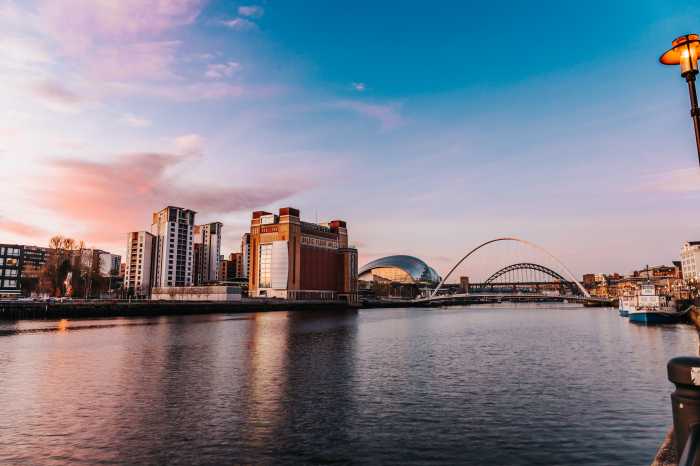 Photo by Ryan Booth on Unsplash

There is a common misconception that Newcastle is all about the nightlife, but there is so much more to see in ‘the Toon’.

Head to the Quayside for culture at the Baltic Art Gallery, with its ever-changing exhibition (with stunning views across the city from its top floor), explore the imposing Norman fortress, steeped in history, a rugged reminder of northern England’s turbulent past or find the 1838 Grey’s Monument, a prominent landmark in the centre of the city.

Where to stay: The Hotel Du Vin is situated in central Newcastle, with breathtaking views over the quayside and the River Tyne, and luxurious accommodation to boot. 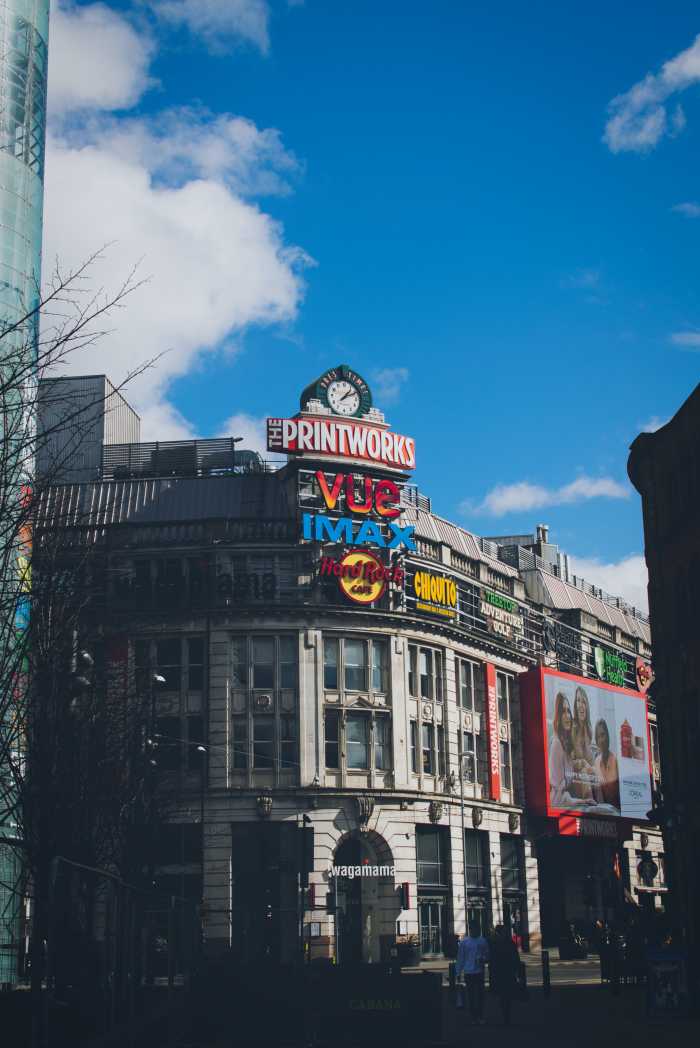 Photo by Cameron Barnes on Unsplash

Diverse and brimming with charm, Manchester is well-known for the warm welcome it gives visitors and is perhaps one of the most exciting city breaks in the UK.

More widely known as the birthplace of the industrial revolution, Manchester has a proud history that spans science, politics, music, arts and sport, and it combines this heritage with a future-facing vision of culture and community.

Head for the centre to explore the eclectic range of restaurants, bars, shops, museums and galleries, or span out towards the Greater Manchester boroughs to immerse yourself in local culture in the quaint market towns, traditional pubs and beautiful green spaces and waterways that can be found here.

Where to stay: King Street Townhouse is set in an Italian Renaissance-style building dating from 1872 and the upscale hotel overlooking Manchester Town Hall is a four-minute walk from the Royal Exchange and four miles from the Lowry cultural centre.

There's a chic wood-panelled restaurant, a cosy, art-filled afternoon tea lounge, and a mezzanine lounge with a fireplace, as well as a rooftop infinity pool, a gym and a spa.

​Our Pet of the Month for July is Indie the Nanday Parakeet.

Homesitter of the Month for July 2021 is Peter Sinclair