Katzenworld - Spotlight on Science: Pheromone use in Multi-Species Homes 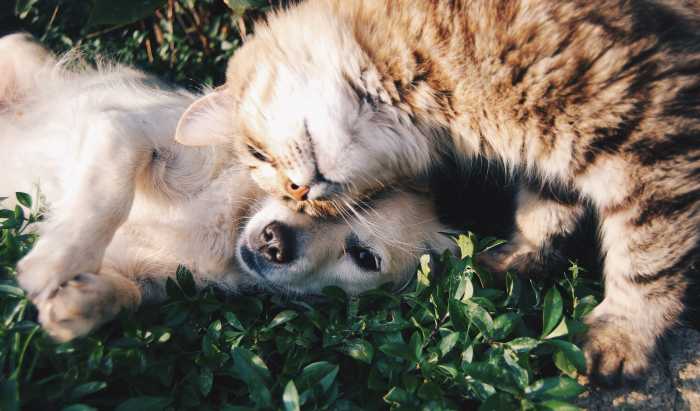 Photo by Krista Mangulsone on Unsplash

For this week’s Spotlight on Science, iCatCare’s Elizabeth Waring reviews a paper published in the summer that doesn’t just focus on cats, but dogs too!

Many cats share their homes with dogs but there is very little research into cat-dog relationships and how we can improve them. Fortunately for us, Professor Daniel Mills from the University of Lincoln, UK, recognises this paucity of research and with one of his students, Miriam Prior, has investigated the efficacy of two commercially available pheromone products Feliway FriendsTM and AdaptilTM on promoting positive cat-dog relationships.

Multispecies pet homes- what do we know about cats and dogs living together?

Across the world many homes have both cats and dogs as pets living together. Traditionally thought of as incompatible, perhaps exaggerated further in popular culture, the stereotype has not deterred many owners from choosing to keep both species together. Research has found that an estimated 7% of UK households, 7.8% of households in Sydney, Australia and 7% of pet owners in Termo, Italy own both species1,2,3. However, despite these numbers, relatively little research has been conducted into the relationships between cats and dogs. Whilst cats are our main focus here at International Cat Care, it is important to look at the impact of their social relationships with other species as well, especially as globally there are many multi-species homes where cats can be found co-living with their canine counterparts and the effects on the welfare of both species is important to consider.

There are a number of potential issues that can arise from dogs and cats living together, including the way in which cats and dogs communicate often having contradictory meanings. For some dogs, particularly those bred to have a high prey drive, cats can be seen as a prey species leading to serious concerns for the cat’s welfare. However, despite their differences many owners report that their dogs and cats happily coexist and even form amicable bonds. In some cases, living with a dog may be more successful for the cat than if it were to share its home with another cat due to the differences in their individual needs and a possible reduction in competition for the same resources.

When issues do arise between cats and dogs living together the impact on the welfare of each animal in the home can be serious. Although, we might assume that cats are likely to be the worst affected, and this is often the case, a quick scan of the internet reveals many videos of dogs being ambushed by cats or showing fearful behaviour around cats, for example, refusing to walk past a cat on the stairs. Furthermore, a poor relationship between cats and dogs is a leading behavioural cause of relinquishment to homing centres, particularly in the case of cats whose owners have recently obtained a dog4. Consequently, the impact on both cats and dogs can be severe if the relationship is not positive.

Pheromone therapy – what is it and how can we use it?

In recent times, pheromone products have been developed by harnessing artificial replications of pheromones released by cats and dogs in varying situations. Pheromones are species-specific chemical messages used by animals to convey messages to one another and are often deposited into the environment. With the increasing popularity in their use as environmental adjuncts in behaviour modification, research has grown in this area. Treatment of stress induced behaviours and the management of perceived environmental stressors are the main areas in which pheromone therapy is most often implemented5.

For cats, there are a number of commercially available pheromone products now available, but the research study of interest investigated the effects of Feliway FriendsTM (Feliway MulticatTM in the US).

Feliway FriendsTM is based on the Cat Appeasing Pheromone (CAP) secreted from glands found around a mother cat’s teats when nursing her kittens. This pheromone ensures that the kittens feel safe and secure and helps the mother to identify her kittens. Few studies to date have looked at the effects of Feliway FriendsTM but from those that have been conducted, positive results have been seen with regard to the efficacy of Feliway FriendsTM in improving cat to cat relationships within a household, with a reduction in aggression6 and increased tolerance7 between cats living in multi-cat households being seen.

Similarly, in dogs, AdaptilTM (Ceva) is based on the Dog Appeasing Pheromone (DAP) which serves the same purpose for dogs, as Feliway FriendsTM does for cats. Whilst there are similarities in the composition of these pheromones, the different species-specific elements increase the effectiveness for each targeted species.

Previous studies have found that AdaptilTM is useful in the reduction of behaviours such as separation related problems, noise aversions, such as fireworks, and improved socialisation of puppies8,9,10. Interestingly, AdaptilTM has never been tested or recommended for use in aggression or conflict between dogs in the same way that Feliway FriendsTM has for cats. Whilst it is unclear why not, Prior and Mills state that the reason may come down to safety as there is a potentially greater risk of injury between dogs than cats who tend to be adopt more avoidance behaviours when conflict arises.

What were the aims of this study?

How was the study carried out?

Participants had to ensure no current medications were being taken by either pet that could have an effect on their behaviour and no previous use of either AdaptilTM or Feliway FriendsTM had occurred.

Owners were interviewed and the relationship between their pets was categorised as one of the following;

Optimum positioning of the diffuser was also discussed with each participant, dependent on their individual home set up to ensure that the diffuser was not obstructed by furniture or close to open windows/doors.

Owners were asked to complete questionnaires on a weekly basis and describe the frequency of ‘10 specific undesirable interactions and seven specific desirable interactions’ as pre-decided by panels of veterinary and/or behaviour specialists. A score of the owners’ ‘perception of their pets’ overall level of relaxation was also collected weekly. A two-week period of scoring before the diffuser was plugged in was used to obtain a ‘baseline’ measure for each pet, followed by 4 weeks with the diffuser plugged in.

What were the key findings?

There were no significant differences found between the two pheromone products in relation to total undesirable and desirable interactions scores. Both products significantly reduced undesirable behaviours and increased desirable behaviours between the cats and dogs living together. Prior and Mills concluded that there were two possible reasons for this finding – firstly, that because the owners were aware that the diffuser was in place with active ingredients there was a possibility for a placebo effect to influence the results. Secondly, it is possible that both pheromone products were simply as effective as each other. The authors ruled out a placebo effect due to the high response rate to the treatments and controlling for as much subjectivity as possible within the survey questions provided to the owners.

The take-home message from this study

The study concluded that both pheromone products improved the relationships between cats and dogs living together and the use of either product is beneficial for helping to reduce behavioural tensions and improve positive behaviours between the animals. Therefore, it could be recommended to owners of both species to use these products to help improve relationships between their pets, with the best choice of product used dependent on the behaviours seen between their own pets.

It is unknown whether using both of these products together at the same time would increase the effectiveness of using pheromone therapy to improve cat-dog relationships and further research would be required to test this. However, as both products showed species-specific improvements to how relaxed the individuals were perceived to be by their owners, this alone could be a reason to use both products simultaneously.

You can read the paper in full here.

If you have a cat and are thinking of getting a dog or vice versa, then getting those initial introductions right are so important as they play a big part in the future harmony between cat and dog. We offer a short course to help with this. For details, click here.

To read the original article written by SarahCatCare for Katzenworld, please visit - https://katzenworld.co.uk/2021/04/04/spotlight-on-science-pheromone-use-in-multi-species-homes/