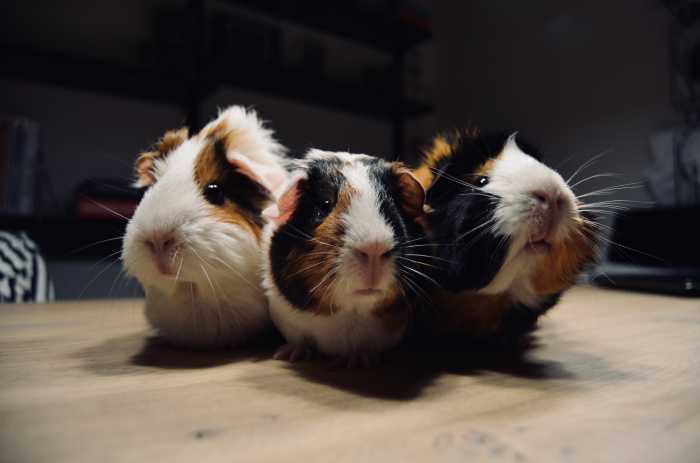 Photo by Karlijn Prot on Unsplash

When you think of guinea pig breeds, there is probably a single image that comes to mind. In reality, though, there is no “typical” guinea pig. Guinea pigs come in several breeds, each of which has a unique appearance and personality.

Researching guinea pig breeds can help you determine which breed is the best fit for you. If you’d like to learn a little more about guinea pigs, take a look at our feature Can guinea pigs eat grapes?

American/English guinea pigs are known for their laid-back, easygoing personalities. Individual variation always exists, but this species does not tend to be as high-strung as some other breeds, especially if socialized appropriately from a young age. Because of their laid-back nature, they are considered to be a good fit for children and first-time guinea pig owners. If you are looking for a guinea pig that you can cuddle and handle regularly, the American/English guinea pig may be a great option.

American/English guinea pigs tend to be relatively small, ranging in length from 8-9 inches. Their weight typically averages 1.5-2.5 pounds, with males being larger than females.

Abyssinian guinea pigs have a distinct appearance, due to the presence of rosettes (swirls or cowlicks) in their fur. In the show ring, the number of rosettes is a large determinant of how well a guinea pig will show. Abyssinians that show successfully often have at least 8-10 rosettes.

Overall, Abyssinians are considered to be a reasonable choice for children and first-time guinea pig owners. They are relatively large guinea pigs, with their adult size reaching up to 12 inches in length. They typically weigh 2.5-3.5 pounds when fully grown.

Skinny pigs are known for their unusual appearance. They have a small amount of hair on their muzzle, feet, and legs, with the rest of their bodies largely hairless. Hairless guinea pigs were initially developed for laboratory research in the 1980s, although they were unsuitable for use as pets at that time. After several generations of breeding with traditional, haired guinea pigs, the sturdier, pet-appropriate Skinny pig breed was developed and introduced as pets in the United States in the 1990s. Because Skinny pigs are uncommon, these guinea pigs may be difficult to find and may cost $100-200.

While their lack of hair is adorable, it also affects the care these guinea pigs require. Skinny pigs must be kept indoors because their lack of hair means they have no protection from cold temperatures or sunburn. Additionally, Skinny pigs eat more than other guinea pigs, because fast metabolism is required for them to stay sufficiently warm. Finally, they need to be handled carefully, because their unprotected skin is more prone to abrasions than other guinea pigs.

Skinny pigs range in size from 8-12 inches, with typical weights ranging from 1-2 pounds.

Teddy guinea pigs get their name from their appearance, which resembles a teddy bear. They have thick, wiry hair that sticks out from the body, instead of lying flat and smooth against the skin. They also have a wider, larger nose than other breeds, which contributes to their unique appearance. Teddy guinea pigs are relatively common and can be obtained from pet stores, breeders, and rescue groups.

Teddy guinea pigs are known for being calm and friendly. Many Teddy guinea pigs are very tolerant of handling and may even enjoy cuddling with their owners. This makes them a good option for children or first-time guinea pig owners. Their short coat requires minimal grooming, making them a relatively low-maintenance guinea pig breed. Their skin is prone to dryness, so frequent bathing is a problem for this breed.

Peruvian guinea pigs can be identified by their incredibly long hair. If left without grooming, their hair will become so long that it can be difficult to distinguish which end of the guinea pig is its head! This breed has a friendly temperament and enjoys human interaction.

The gorgeous coat of a Peruvian guinea pig, however, is very high-maintenance. Peruvian guinea pigs have long, silky hair, similar to humans. Like humans, their hair requires daily brushing to keep tangles to a manageable level. If the hair becomes matted, it can become painful for your guinea pig and contribute to skin infections.

In addition to brushing, the hair of Peruvian guinea pigs must be regularly trimmed, to keep it from becoming so long that it hinders the guinea pig’s movement. While you may see some show Peruvians with incredibly long hair, these guinea pigs must have their hair pinned up and wrapped for protection between shows; this is not practical for a typical pet guinea pig.

If you are looking to add a guinea pig to your home, resist the temptation to purchase the first adorable face you see in a pet store! Take your time to research guinea pig breeds, to determine the breed that will be the best fit for you and your family.

Dr. Barnette received both her Bachelor of Science degree in zoology and her Doctor of Veterinary Medicine from the University of Florida. She’s an experienced writer, educator, and veterinarian, with a passion for making scientific and medical information accessible to public and professional audiences.