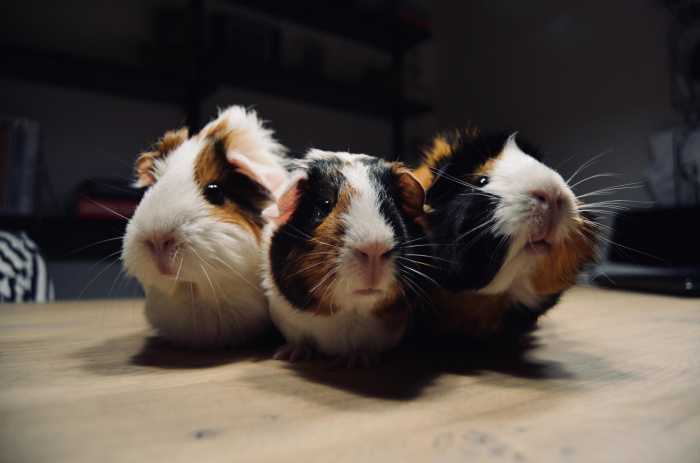 Photo by Karlijn Prot on Unsplash

If I could choose one thing that I love about guinea pigs more than anything else, it would be those adorable guinea pig noises they make. They’re so communicative and you really get the feeling that they’re having conversations with one another. If you’ve ever wondered what your guinea pigs are saying when they make cute noises, this article is for you! We’re going to look at some common guinea pig noises, and also at some body language you might spot, too.

Guinea pigs have so many methods of communication because they’re social creatures. The wild cavy lives in a small group, but it’s thought this is mainly due to the way predators hunt and to make sure there’s enough food to go around. With plenty of food and protection from predators, domesticated guinea pigs are happy to live in groups of 10 pigs or more! This means they need to communicate with one another to discuss food sources and predator risks, de-escalate arguments, and to create a stable social hierarchy, all using a few simple guinea pig noises.

Guinea pig noises you should know

When your guinea pigs are communicating with one another, they’ll use a combination of noise and body language. Just like ‘okay’ can mean a lot of different things depending on tone and context, it can be difficult to interpret noises on their own. Instead, think about the situation your pigs find themselves in and what their body language is saying to help you interpret what your guinea pig is trying to say. Here are some of the common noises, and their possible meanings.

Wheeking is probably the most common and well-known guinea pig noise. It’s a slightly demanding squeak designed to get attention or (more often!) food, and it’s primarily directed at humans. Guinea pigs in the wild don’t wheek much, and when they do it’s much quieter than the loud wheeks you might hear from your guinea pig. Make no mistake, if he’s wheeking, your guinea pig is demanding something – food, attention, or to be let out for a run around!

Bubbling is quite an accurate description for these shorter, chattier, guinea pig noises. Guinea pigs making the bubbling noise are usually relaxed and satisfied – not dissimilar to a cat’s purr. However, depending on situation and body language, and minor changes in tone and duration of the purr, this noise can mean annoyance. Shorter purrs and tense piggies are more likely to be annoyed than satisfied.

Rumbling or growling is a low-pitched bubble/purr. It’s usually combined with some pretty impressive swaying and strutting to produce a display of dominance. It may also be used by male guinea pigs to woo a female. You might also get a rumble from your guinea pig when you’re petting them somewhere they don’t like – especially over the bottom!

Teeth chattering – usually a sign of an angry guinea pig!

If you can hear your guinea pig’s teeth clicking and chattering, chances are he’s pretty cross! This gnashing sound is one of the guinea pig noises that shows anger and annoyance – so if you’re doing something to your pig, you should probably stop! Teeth chattering in guinea pigs may be a sign of dental issues and pain, and may be accompanied by showing the teeth in a yawn. Teeth chattering shouldn’t be confused with the happy grazing sounds of a pig eating his hay.

Although rare, I’ve included this one here because it’s so strange. If it sounds like a bird has accidentally got into your guinea pigs’ cage and is singing away, that’s probably a guinea pig chirping. It’s so unlike all the other guinea pig noises that you’ll probably be surprised it’s coming from your pig! We aren’t really sure why guinea pigs chirp, but current thinking is that it’s a sign of stress. It appears to be more common in young pigs – perhaps a little like a baby’s wail.

All of these fascinating noises are best interpreted with the pig’s body language in mind. Changes in body language are generally more subtle and harder for us humans to appreciate, but are definitely worth keeping an eye out for. Let’s look at some common guinea pig body language and what it means.

Probably my favourite guinea pig behaviour, ‘popcorning’ involves jumping in the air, then running around and repeating. It can look like leaping or bucking and is more common in young pigs – so you can think of it like a child jumping for joy or a horse with the wind up his tail. It’s a sign of excitement and happiness, and is wonderful to watch! If your piggy is popcorning, you’re definitely doing something right!

If their verbal discussions about who is dominant are not going well, the guinea pigs will move to putting their chins in the air. Essentially – who is bigger? If your guinea pig is particularly cross, he’ll throw his head around. This might be accompanied by any of the other signs of anger such as teeth chattering, rumbling, and purring. Whatever you’re doing, it’s probably best to stop, as he’s clearly asking you to back off.

As with most species (except humans), showing the teeth is a warning to back off. The argument might be about who is dominant, or may be over food or a female. Guinea pigs can also display this behaviour towards humans if they’re upset – it may be accompanied by chattering and tossing of the head. It’s wise to leave an angry pig alone to calm down, and remove the other pig if necessary!

Guinea pig noises range from the happy to the angry, and even the scared. Combined with their body language it gives them the ability to communicate a range of different things. Now you know what your guinea pig is saying it’s just down to you – their human slave – to obey!

Dr Joanna Woodnutt is an experienced vet with an interest in companion animals. She recently left full-time practice to work as a relief vet and write articles about pets.

To read the original article, including videos, by Dr Woodnutt for PetsRadar, please visit: www.petsradar.com/advice/guinea-pig-noises-and-body-language-explained