The top five reasons to become a homesitter in 2022

PetsRadar - How to wash a dog bed

Katzenworld - Pet Responsibility – Your Child and Their Pet 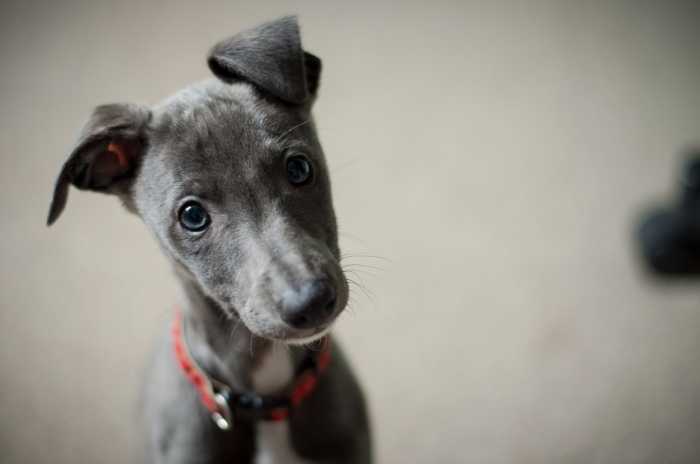 Photo by Chris Arthur-Collins on Unsplash

Written by Sarah Butcher for PetsRadar

Small dog breeds can often get a bad rep, labelled as ‘yappy’ or not given the same kudos as big dogs. But despite their size, small dog breeds have a lot of love to give and can make excellent pets and companions.

And every small dog breed has different characteristics and personalities which are suited to a variety of dog lovers. From a glamorous Poodle to a cute Pug or a friendly Dachshund, there’s a small dog to suit every owner.

Dogs make a great addition to any family or household, but if you don’t have space for a large dog, then a small dog breed can be the answer to your pup-loving needs, plus many small breeds are great with kids and families alike.

Whether you’re considering adopting a dog or adding to your four-legged family, or you simply enjoy learning about the variety of small dog breeds out there, then have a read about some of these teeny four-legged friends. If you prefer larger breeds, then why not check out our round up of the most popular dog breeds to see who made the cut? 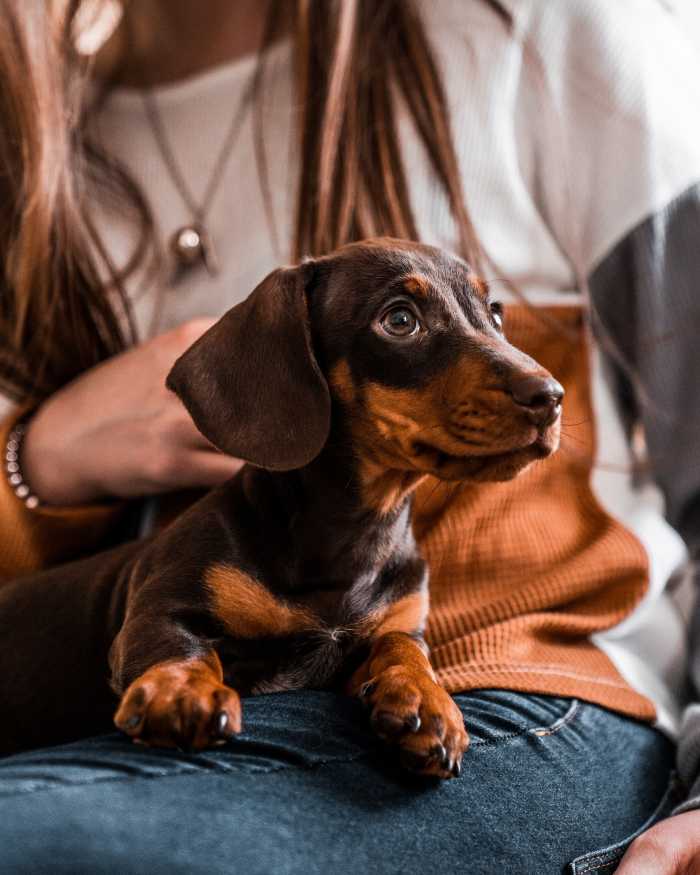 Photo by Brad Starkey on Unsplash

Everyone loves a sausage dog. Known for their tiny feet and elongated body, the dachshund is not only incredibly cute but they have one of the bubbliest personalities out of all of the small dog breeds. Dachshunds were originally bred as scent hound dogs to hunt badgers, rabbits, or foxes, which is what makes these tiny pooches so courageous in their nature. They are fiercely loyal and make great family pets. They are known to be slightly trickier to train than other dogs, but once they’ve learned they are fantastic companions, great with kids, and make good watch dogs too! They're also fearless when defying disabilities.

2. Pug: best for making you laugh 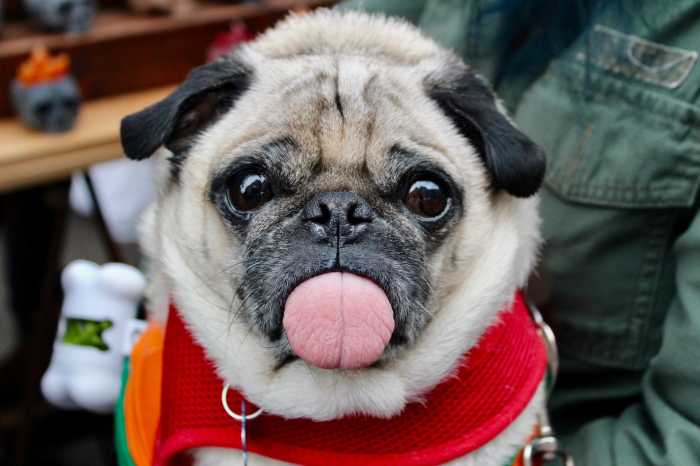 Photo by Daniel Sandoval on Unsplash

Pugs have taken the world by storm in recent years due to their cute nature and ability to make folks smile. Pugs are incredibly friendly which makes them great family dogs and safe to be around children. Despite their dopey looks, Pugs are incredibly intelligent and can be trained very easily. If you like dogs who enjoy a snuggle on the sofa, then a Pug will be perfect for you, they enjoy lazing around and getting affection from their owners, but they’re also full of character and enjoy social environments. There are even Pug Cafes! 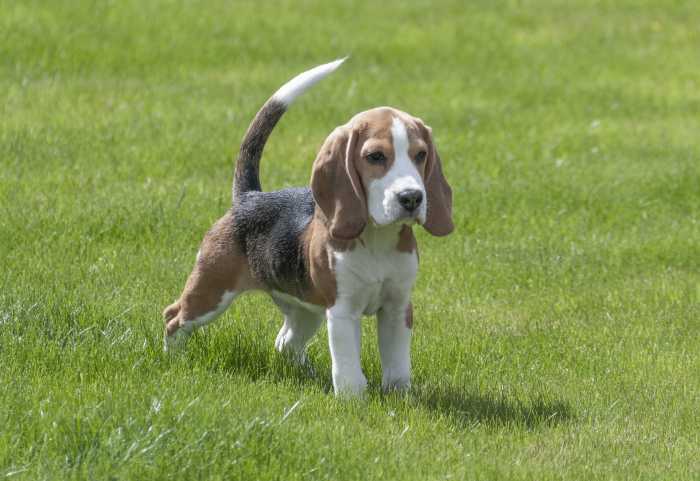 Image by Nick115 from Pixabay

The Beagle is a loyal companion for any pet owner and again they make great family dogs due to their loyal, caring and playful nature. The Kennel Club UK states that the Beagle is the smallest of all of the British pack hounds, and Queen Elizabeth II had a pack of miniature Beagles herself. The miniature Beagle is even small enough to be carried in a saddle pannier or a pocket, but they are no longer as popular in the UK as they are in the US. The American Kennel Club describes their temperament as friendly, curious and merry – three qualities that make a great pet and friend. 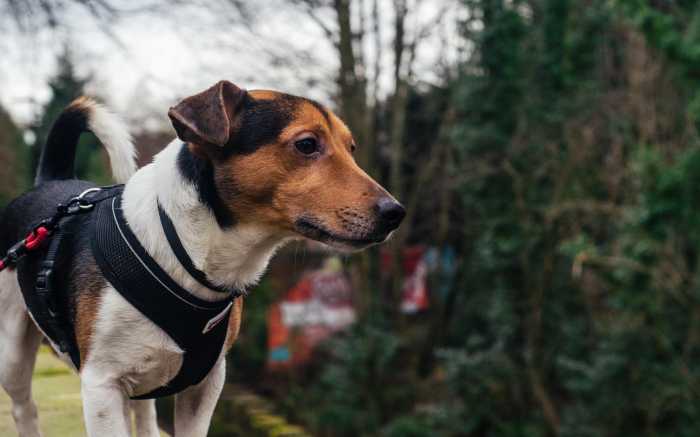 Photo by Shane Rounce on Unsplash

It’s not just big dogs that can keep you active, the Jack Russell Terrier may be tiny but they are mighty. Their little legs can take them far and wide and you’ll have plenty of fun exploring with this small dog breed. They require a lot of mental and physical stimulation and are incredibly smart. Once again they make a great family pet, and enjoy plenty of snuggles as well as the freedom to run around. The Jack Russell grows to around 35cm tall so they remain tiny for life, making them the perfect addition to close-knit households who will enjoy the bubbly personality of this dog. 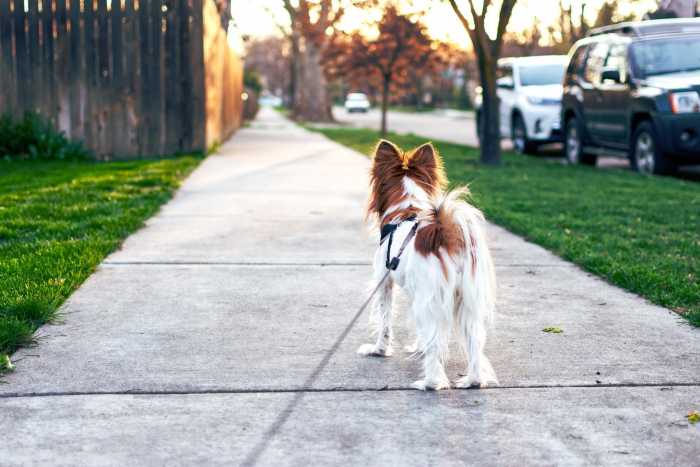 Image by Donald Clark from Pixabay

The Cavalier King Charles Spaniel is a beautiful dog, historically bred as a hunting dog, but today are much preferred as lapdogs. There are a few Spaniel breeds that are known under this title, however according to The Kennel Club UK, the ‘Cavalier’ breed is recognised as the original breed and has a slightly different shaped muzzle. Those with a flatter face are simply known as a King Charles, but they both have the same gorgeous long ears. They make great life-long companions and will enjoy sitting with you by the fire on a winter’s day. The Cavalier has a very calm and serene disposition with an adorable face and fluffy ears that you won’t be able to resist giving a snuggle. This small dog breed grows to a height of approximately 28cm. 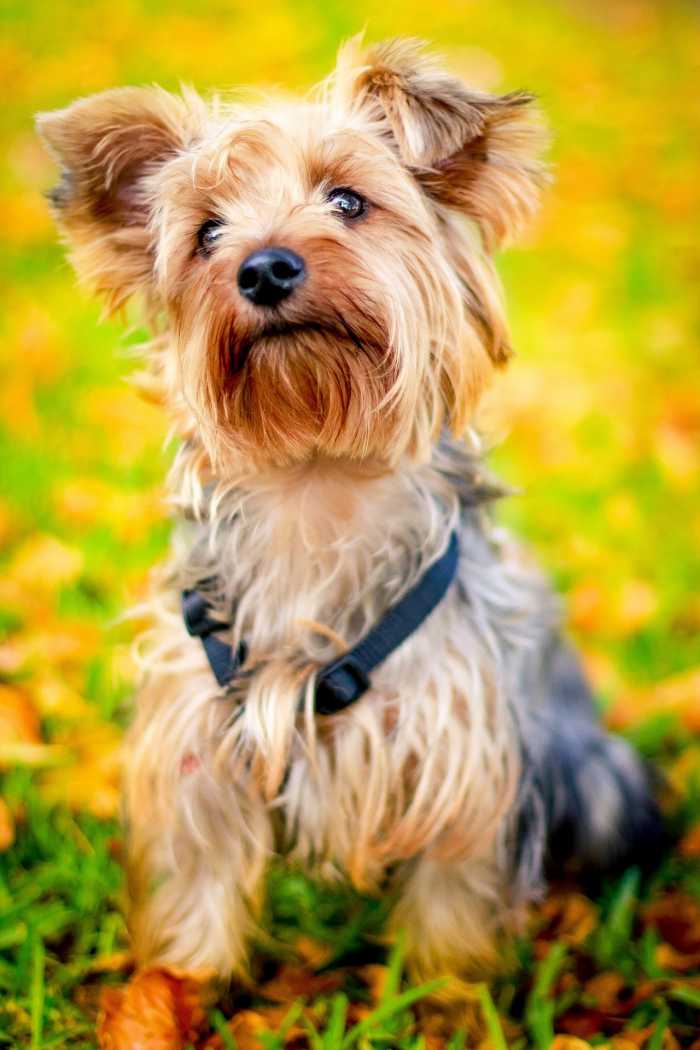 Image by Pexels from Pixabay

If you find yourself really wanting a four-legged companion but know you suffer with pet hair allergies, then the Yorkshire Terrier is a great breed to consider. They have a naturally hypoallergenic coat, which means you won’t have to miss out on cuddles and fusses with them. These dogs are incredibly sweet, happy and bubbly. The Yorkshire Terrier is one of the smallest of the terriers and weighs approximately seven pounds on average. They have a life expectancy of around 16 years and are surprisingly confident and bold despite their small size. This is a dog that will look after you just as well as you look after them. 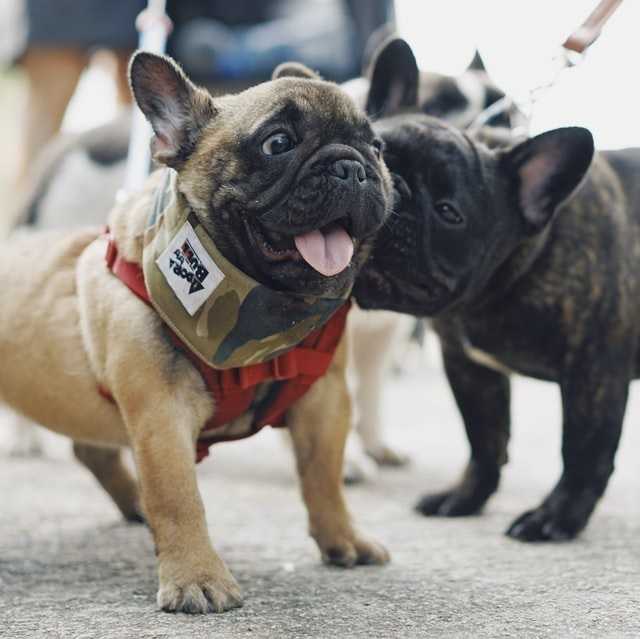 Photo by For Chen on Unsplash

Frenchies are big softies and irresistibly cuddly, and a good thing too, since they also enjoy a good fuss. Exercise isn’t really their thing, so if you don’t fancy having to take a dog on lots of walks every day, then a French Bulldog is a great choice for a four-legged friend. They are essentially a toy sized version of a bulldog and a cross with local ratters. They have pointed ears and an air of curiosity on their faces. Frenchies are known for their easy-going nature, and are described by Purina as bright, affectionate and charming. They don’t shed much, nor do they tend to bark much but they make great loyal watchdogs. 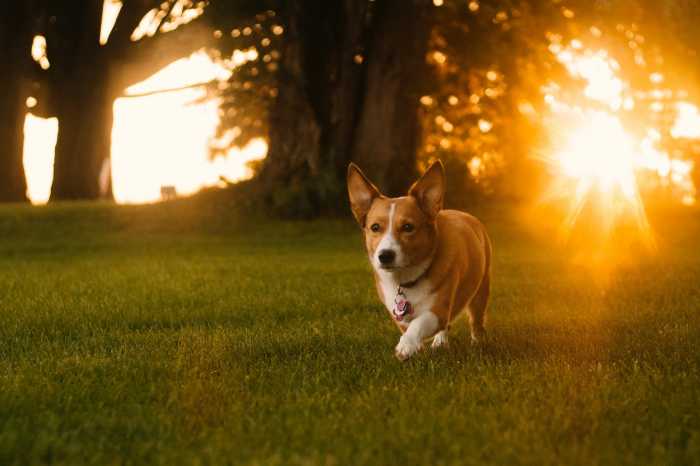 Another favourite of The Queen of England, Corgis are exceptional small dogs with heaps of personality and lots of love to give. With a big smile and tenacious character, the Pembroke Welsh Corgi was originally a cattle hearding dog, but today make a very agreeable housedog. According to the AKC, they are surprisingly strong, athletic and lively, but also really enjoy being needy when they want to be. They have short yet powerful legs so if you’re looking for the best of both worlds with an active yet cuddly pooch, a Corgi is a great choice for companionship.

9. Chihuahua: best for carrying with you 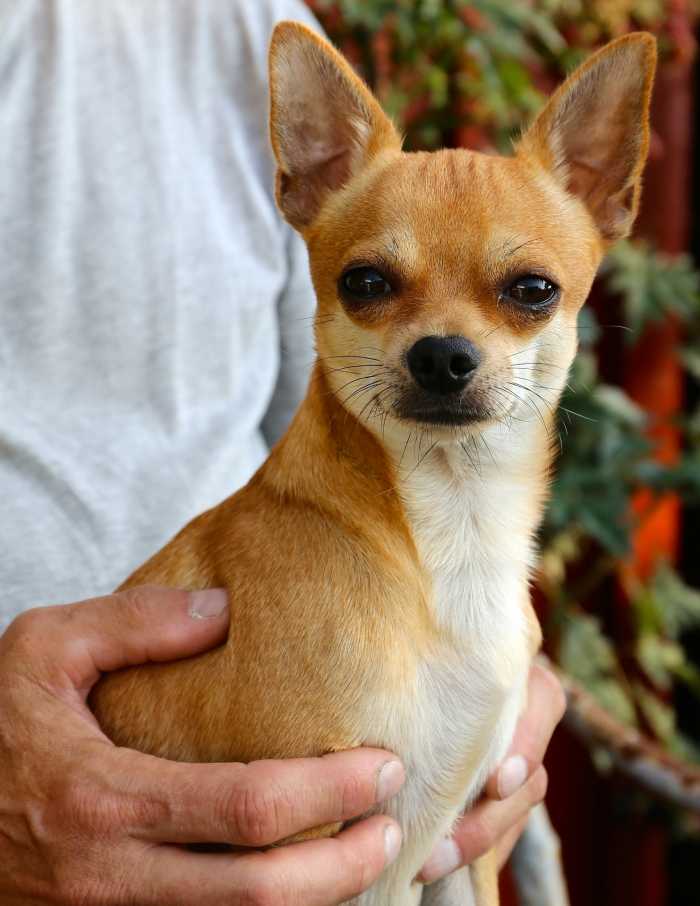 Image by a-mblomma from Pixabay

While it might seem like a stereotype, Chihuahuas do make wonderful handbag dogs due to how light they are, weighing in at no more than six pounds on average. They are the smallest of the small dog breeds and are named after the Mexican state of Chihuahua. They’re a short-haired dog that are truly devoted to their owners and love to spend time with you. Despite their size, they are brave and quick, meaning they’ll keep you on your toes. AKC describe them as sassy, a reputation they have no-doubt developed from their portrayal in many Hollywood movies as the sidekick of female protagonists. 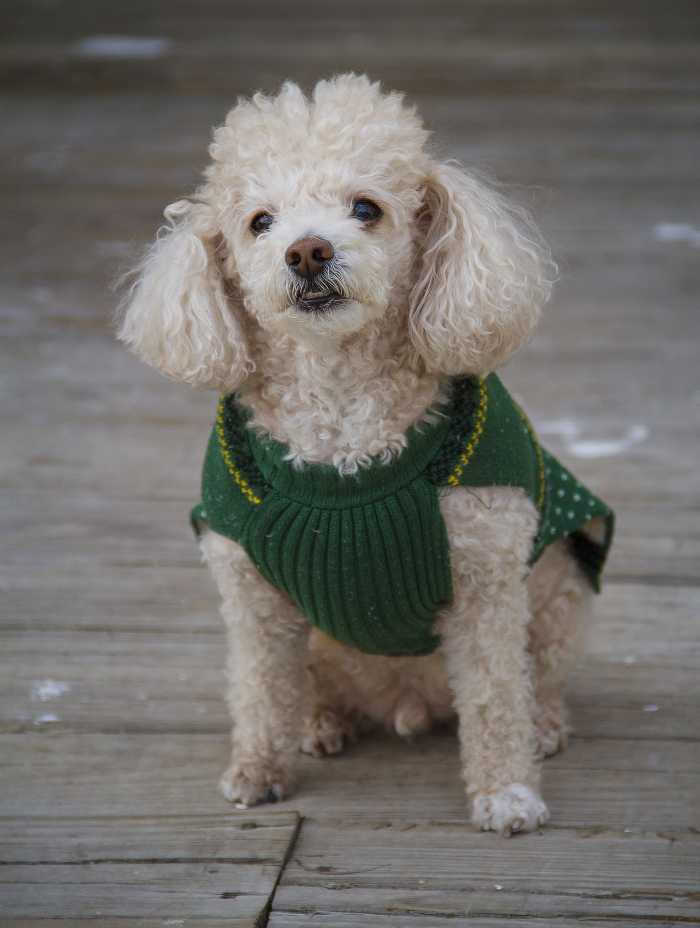 Image by mschiffm from Pixabay

Ranking in the top ten for most popular dog breed in the American Kennel Club, the Miniature Poodle is a majestic dog that stands tall and proud despite their diminutive size. Weighing approximately 10-15 pounds and standing just 15 inches tall, the mini poodle could be mistaken for a cuddly toy. It has become very popular to cross Mini Poodles with the likes of Labradors, Golden Retrievers and others. Poodles are very glamorous and you’ll enjoy looking after them and showing them off.

So there’s our top ten small dog breeds full of character and personality. Which one is your favourite?

Sarah is a freelance writer and marketer, covering a variety of topics from lifestyle and fitness to sustainability and travel. When she’s not writing, she can be found relaxing with a cuppa and a cute doggo snoozing on her lap!

The top five reasons to become a homesitter in 2022