Yours - 8 of the best canal walks in the UK

Dog Time - Hug Your Hound Day: How To Teach Your Dog To Give Hugs

Pets Radar - What can hamsters eat? A vet’s guide to good nutrition

Pets Radar - How to remove a tick from your pet

Dog Time - Responsible Dog Ownership Month: 6 Tips To Be A Better Human For Your Dog 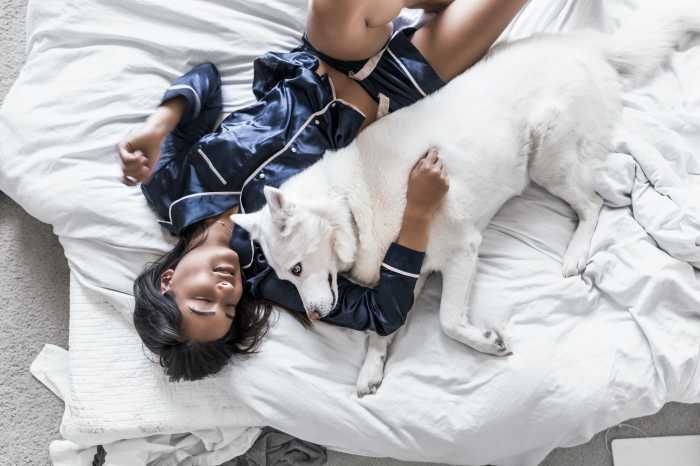 Photo by Kristina Petrick on Unsplash

Benefits of Owning a Pet

Almost half of all pet owners share their bed with their pet. If you spend most of your day away from your pet, sleeping in the same bed can be a great way to spend time with them to make up for the time spent apart.

Pet experts used to advise owners not to let pets sleep in their bed. They believed that it may cause illness in the owners, and promote bad behavioral habits in the pet. Many veterinarians now believe that those assumptions are overblown or incorrect.

The human-animal bond is beneficial for the human and the animal, with humans enjoying many physical and psychological benefits. According to the Mayo Clinic, sleeping with your dog doesn't disturb your sleep, though the dog's position makes a difference.

A study published on HABRI Central (Resources for the Study of the Human-Animal Bond) found that animals can help people with long-term mental health problems experience a sense of security and routine that helps them with their condition.

The Mental Health Foundation states that having a pet reduces the number of outbursts for Alzheimer's patients, and benefits children with ADHD as well as autism.

Another study from the State University of New York at Buffalo found that when people were doing a stressful task, they felt more comforted by their dog nearby than a friend, spouse, or family member was nearby. It's no surprise to most pet owners that their furry family members are a great source of support.

The Centers for Disease Control and Prevention (CDC) have stated that having your dog around lowers your blood pressure, cholesterol levels, and triglyceride levels.

Cat owners were found to have more than a 33% smaller chance of heart attack or stroke, according to a study from the University of Minnesota.

A study published in the National Institutes of Health (NIH) showed that pets have a positive impact on mood. The study had students exposed to pets for 20 minute periods and found that the student's well-being and mood improved and their anxiety levels decreased.

Prevention of Allergies in Infants

Surprisingly, owning pets when less than 1 year old helps prevent allergies because the dander on hair acts as immunotherapy. A study from Sweden also found that the more pets in the home, the better, referred to as the "mini-farm effect," as children raised on farms tend to not have allergies later in life. However, owning a pet later in life doesn't seem to have the same effect.

The CDC also states that having pets gives people more opportunities for outdoor exercise, as well as meeting other people. In a world that's becoming more digital, and less face to face, it's very common for people to strike up a conversation with a pet owner as they're taking a stroll.

Being near an animal can increase our levels of oxytocin, also known as the "love hormone." Some owners like the rhythmic sound of their animal's breathing, and claim that it helps them get to sleep faster.

Sleeping with a dog can make you feel safe, as larger dogs could fend off an intruder, and any size dog will start barking if anyone tried to break into your house or apartment.

For all the benefits of having a pet, it's important to be aware of the possible risks, and how to prevent problems.

Tips for Getting Your Pet Out of Your Bed

One reason your pet may enjoy sleeping in your bed is that they're in a great strategic position where they can see everything happening around them. They may also like the extra warmth they get from sleeping with their owners.

If for whatever reason you need them to not sleep in the bed with you, it's recommended that you do it gradually. Before you start the transition, add a blanket to your bed that they sleep on that you can later add to their new sleep spot so they associate sleep with their new bed.

Start by having them sleep in their own crate or bed near your bed. You can put toys or treats in their new space so they associate their new space with things they like, and not feel that it's a punishment. Gradually move their bed further from yours, until you can move them into another room.

Most experts won't discourage you from letting your child sleep with your pet. The chance of disease transmission from the pet to the child is very rare, though it's a good idea for your pet to get a yearly check-up.

One thing to keep in mind is the maturity of the child. If they're alone in the room together, you want to be confident that the child doesn't do anything to disturb the pet. Cats and dogs are usually tolerant of tail-pulling and teasing, but if an animal feels threatened, they will bite and/or scratch to protect themselves.

If your child is immunosuppressed, talk to your paediatrician. Children with cancer, undergoing chemotherapy, or dealing with other issues most likely won't be approved by a doctor to sleep with the family pet.

Yours - 8 of the best canal walks in the UK